"Thanks for answering our question. We will review the ad that you sent us in your email. Please note however that there is a difference between the two images. In the one that you forwarded us you can see some clothes on the people, while in the other, cause it only show the top of the bodies, it can imply nudity.

We will approve your image so it can be running, but we cannot guarantee that we will be able to maintain it live if we notice that we start to receive bad feedback from the users. The fact that is only targeting a particular audience is not a reason to approve or disapprove an ad. We want to provide the same service to all the advertisers regardless of which audience they are targeting.

Also some images will be borderline case, and it is more difficult to define which kind of images we can approved and which ones not, compared with the text of the ad.

Please let us know if you have further questiosn."

Looks like they finally relented, in the face of continued pressure against their homophobic advertising editorial policies. Let's see how well this ad fares compared to some of the other ones already running in the same campaign.

Update:
These newly approved ads have been running for two days now and are already showing the highest Clickthrough Rate compared to all our other ads within the same account!

So much for Facebook's predictions about the ads being offensive to users!!
Posted by AccuraCast at 19:12 No comments:

Since the previous thread about Facebook's homophobic ad policies got too long, we've decided to launch a new post here.


Update 2
We thought we'd just let this lie, as Facebook were being vague and would probably use some lame "we can predict what our users want" defense. However, we came across the ad shown below, on Facebook, and just had to take this issue back up with them. 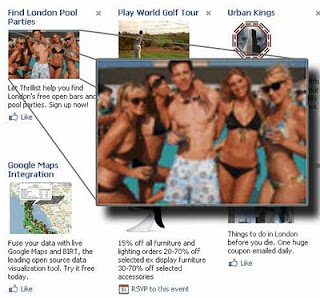 So now we've replied to Facebook's last message, saying:
"Our ads are targeting ONLY gay users. Keeping that in mind, I find it near impossible to believe that any gay man would send Facebook negative feedback about a picture of a shirtless man or of two men with their arms across each other's shoulders.

That might be the case with your non-gay audience, if Facebook's heterosexual audience is also extremely homophobic.

However, what I find truly unbelievable is that your system would predict that a gay audience would not mind being subjected to the attached ad, which I have seen throughout the day today, showing an equally scantily clad heterosexual man, with FOUR EVEN MORE SCANTILY CLAD women in his arms.

I can't wait to hear what poor excuses you'll come up with to disprove that this is anything other than blatant homophobia.

PS: Note that all your responses are being shared publicly, so please think twice before providing yet another lie or half-baked response to my query.

This is a serious issue. Homophobic discrimination is illegal and where we stand right now, Facebook has shown little to contradict a definite homophobic trend where it comes to approving ads on the network."
Posted by AccuraCast at 19:40 No comments: