MTV and Rovio team up to stop cyber-bullying

MTV and Rovio, developers of the Angry Birds game series, have joined forces in a bid to stop bullying online,  as part of MTV's ' A Thin Line' initiative to stop cyber abuse, harassment and discrimination.
Players of Angry Birds Space will be rewarded with an extra Golden Egg level in the game when they support MTV's campaign online. When they make some form of positive engagement with the campaign, such as sharing 'A Thin Line' resources across Twitter and Facebook they will be provided with access to the secret level. With the majority of cyber bullying emanating from teenagers and young adults MTV's Rzepka described Angry Birds as "a place we could really connect with young people" and the same applies for the social media platforms integrated in the the campaign. The partnership launches on March 22nd and is likely to be successful in adding to the 1 million existing supporters of MTV's 'A Thin Line' campaign. 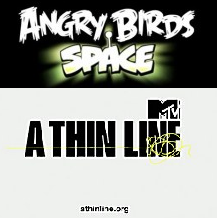