The rivalry between Pepsi and Coca-Cola has been one of the most intense and competitive brand wars of all time, not to mention one of the longest running as the battle between them has been raging on for well over a century.
The marketing contest between the two brands has evolved with technology and since the products were introduced in the late 1800's press, radio, television and the internet have all been used in the promotion of each company's products and the slander of its competitors' products.

Now it appears the rivalry will be heading online again, with both Pepsi and Coca-Cola recently announcing that they will be using social media in their upcoming marketing activities. Coca-Cola have created a partnership with Spotify which will see the music streaming service given space on the Coca-Cola Facebook page. Under the partnership Spotify will be assisting Coca-Cola in developing mobile apps later this year.

Never one to be left behind by their rival, Pepsi have struck a deal with Twitter to stream live concerts via the social media platform as the company increase their marketing budget by £300 million. Pepsi will also be using the "Pepsi Pulse" feature on their website, which integrates the sharing of entertainment news and social media, attempting to engage with young audience as they reposition themselves under the new slogan "live for now". 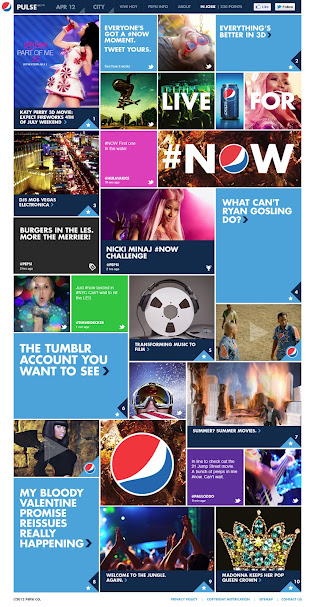