Earlier this month it was confirmed that Pepsi had struck a deal with Twitter to gain brand presence on social media, combating the similar collaborative efforts of Coca-Cola and Spotify/Facebook. At the time Pepsi stated that partnership between themselves and the social networking site would enable them to stream concerts via Twitter, however they refused to divulge further information until this week. 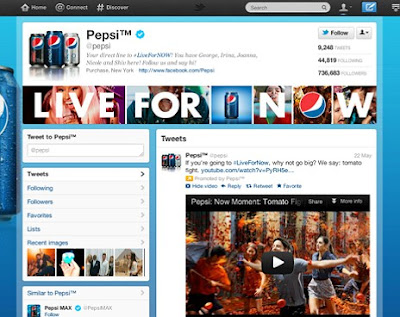 The soft drink manufacturer has stated that the partnership with the popular social platform will last a year and they have also revealed the number of techniques that they will employ to achieve higher brand awareness and favourability. The "Live for Now Music" campaign will offer free music downloads to followers who tweet with the hashtag #PepsimusicNOW, an approach which is likely to generate high levels of awareness via Twitter and should see the hashtag trending on a regular basis. Pepsi will also be delivering a number of pop up music concerts through Twitter, with acts including Nicki Minaj set to be involved. They will also be using their Twitter profile to create interaction between themselves and customers, by tweeting about new music acts, latest album releases and current music news.
Posted by Unknown at 16:00