The End of Music Store and Physical Albums

It is highly likely that children of today will not know the link between a pen and a cassette tape (see picture below). 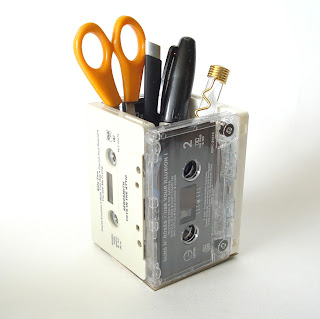 The innovation of technology is changing the world as we know so rapidly that we are fascinated and scared at the same time. Fascinated by new revolutionary devices such as the Ipad and smart-phone's, and scared because reality is so more dynamic, compared to the past, that being updated and upgraded is becoming harder and harder.

An example of these changes is the world of the music. Nowadays, the Internet offers an unlimitled number of songs, and with the help of popular platform such as YouTube and Spotify, they can provide a wide range of music services (e.g. streaming and downloading services). Moreover, smart-phone apps allow people to play their songs whenever they are and go.
In 2011, the online music market increased by 8% in global terms, counting for more than 5 billion of legal downloads. In January of this year, online sales eventually surpassed physical sales, with no signs of slowing down. Recent studies have declared the (r)evolution digital music will be the cause of record stores' bankruptcy: by 2016 physical sales will drop by 77% (it was already declined of 76% between 2000 and 2010). This information was provided by “The wall Street Journal”, not only by local shops, but large international chains as well.

Probably in less than 10 years, CD-ROM will be not produced anymore because it's technologically will be obsolate, and young people will not remember (or even know) vynil and cassette's existed. However, a part of nostalgic reflection, is that innovative technology is improving the quality of life, so in-depth, that we could not even have imagine 5 years ago. Nowadays, thanks to the digital music and devices, people can download thousands of free songs per days and bring their entire music-world, wherevere they go.