8 years after its creation, Mr Zuckerberg announced Facebook, has reached one billion users that actively take part every month on the social network and connect with each other.

Launched in 2004,  by 2007 Facebook was already one of the most viewed websites around the world. Following this, Facebook continued to grow rapidly and in 2010 “The Social Network” was released, a film documenting how this social network had changed the way people connect and communicate with each other.

Indeed, 2012 is “the year” for this company. In fact on March 2012 an App Center has been released and, in April, Facebook also bought the Instagram platform, May has seen shares hit the Stock  exchange and, finally, in October 2012 an announcement revealed that more than one billion users have been reached. Mr Zuckerberg affirms "Helping a billion people connect is amazing, humbling and by far the thing I am most proud of in my life".

A key question is where all these users are coming from? A recent piece of research by Socialbakers.com has answered this question: 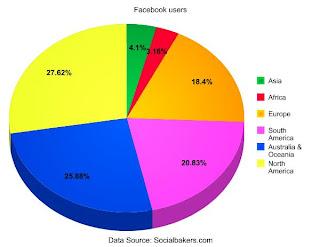