'Using internet is like having a tank in your bedroom’ 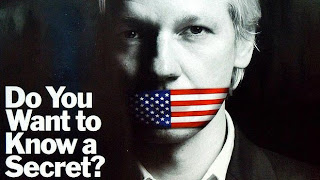 In a new book, WikiLeaks founder Julian Assange writes that Google and Facebook are as dangerous as a state that holds complete authority and control over people’s private and public life. According to Assange, Facebook, Google and Twitter are in it to collect their users’ personal data. He thinks that using a phone is like having a tracking device that also makes calls. He is convinced that the internet will blend global humanity into one big network of mass control and surveillance. Assange recommends that users should encrypt online activity to make it possible to create an information network that the state can’t decipher, believing this is necessary as he 'has met the enemy'. His new book is called: Cyberpunks: freedom and the future of the internet and was published on Monday. The book is intended to warn internet users of the imminent threat from the internet, calling it 'the most dangerous facilitator of totalitarianism we have ever seen'.

His organisation Wiki Leaks is a non profit organization, publishing secret information from whistleblowers and news sources. Their goal is to bring important information and news to the public with original source material. Whistleblowers can send documents to their online drop box to leak information to journalists in an anonymous way. Some of their documents have become front-page news items about the Afghanistan War’s costs and deaths, corruption in Kenya and prisoners in Guantanamo Bay detention camps.
He is currently housed by the Ecuadorian embassy in London, where he found political asylum. Authorities in Sweden still want to question him over alleged sexual offences. He himself claims that if he leaves the embassy he will be extradited to the United States. Stating that a grand jury wants to investigate him over WikiLeaks publications that were released in 2010.
Posted by Unknown at 13:32