We all know that Apple Maps has hardly been a success, but there has been an incident in which it has even been life threatening! In Victoria, Australia, the police issued a warning statement last Sunday. They warned that drivers planning a trip to the city Mildura should not rely on Apple Maps, which comes standard with the company’s iPhone 5 and tablet devices.

In the statement, the police state that Apple’s navigation system places Mildura 43.5 miles (70 kilometers) away from its actual location and in the middle of a national park. This fault has led six people to travel into the wilderness, in blazing hot temperatures and have to wait for the police to rescue them. One man was even stranded for 24 hours in temperatures up to 46C. According to the police statement the situation has become 'potentially life threatening' because the park has no water supply and it can be extremely hot in that area. A police inspector told ABS news that 'if it was a 45-degree day, someone could actually die.' 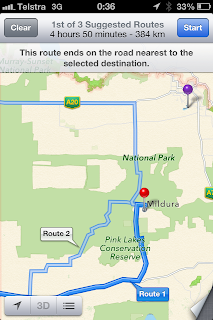 The Victoria police have contacted Apple about their maps application and have recommended that motorists rely on different maps until the problem is fixed. Apple could not be reached immediately for feedback on the navigation system, with a number of problems already being reported about the mapping App. The earlier Apple Tablets and previous iPhones were equipped with the Google App (GOOG) which was working very well. Apple decided however that they no longer wanted to give valuable information about how their customers used Google Maps and created their own offering. The technology giant chose to buy mapping data from 24 different suppliers and display it using Apple’s own software. Map data has been bought from companies like Waze, Yelp and TomTom, although it is evident that some of this data has to be fixed and the incident in Victoria, Australia shows that Apple is still struggling with that.

Errors have often been comical. If you wanted to travel to Washington DC’s Dulles Airport, following the Apple Map directions would possibly cause you to run into an airplane and you would be arrested without a doubt. The Brooklyn Bridge and the Sydney Anzac Bridge had sharp plunges in the road. If you used those images you would have been pleasantly surprised if you made it safely over the bridge. The system didn’t recognise Jerusalem as Israel’s capital and the train station in Helsinki was turned into a park. Chief executive Tim Cook has admitted that Apple Maps has not been a success to say the least, as he even admits that they ‘screwed it up’. The company has already fired mobile software lead Scott Forstall and Maps manager Richard Williamson. They will endeavour to fix the errors in maps as soon as possible.
Posted by Unknown at 11:00