The internet – no longer a luxury, but a basic human right

According to a recent survey, 83% of internet users across 20 countries consider the internet to be a necessity in their daily lives and is heralded as a tool which facilitates free speech. The majority of participants strongly believe it can make the world a better place, reduce child mortality, bring an end to extreme poverty and can stop all together child and female trafficking. However, the biggest role the internet has to play in users lives is in the realm of education, with 98% claiming it had a part in shaping their knowledge and education.


96% of participants stated that they log onto the internet each day, reinforcing its importance. Whilst more than 90% citing their social media accounts as their principle reason for using the internet, with two thirds admitting to logging in on a daily basis. However we are left questioning what has the world come to, when a baby gets a Twitter account before it is even born?

Congratulations are in order for newly made parents Prince William and Kate Middleton, who recently announced that they are expecting their first born. Under #royalbaby, the new parents received 1,000 tweets per second and these included congratulatory tweets from the likes of Richard Branson, Kim Kardashian and Boris Becker. The latter even attached a “thumbs up” photo. Within 5 minutes @IamRoyalBaby had more than 500 followers. 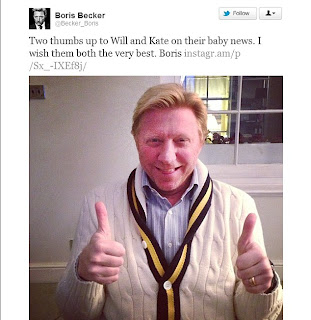