Trolling: Why people do it?


The horrific shooting that took place recently in Newtown, Connecticut has evoked a lot of discussion online as expected.  As I delved deeper into online forums and discussions, I began to slowly notice some unnecessary and disturbing behaviour. Find below just one of the few I came across: 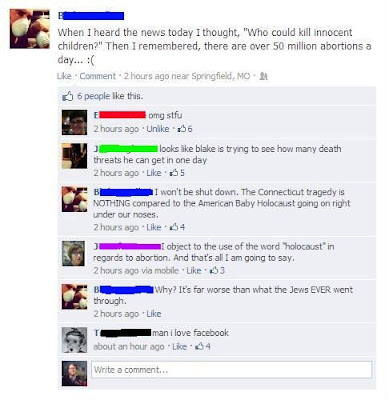 This trend of seeking (mostly anonymously) to provoke outrage by posting insults and abuse online is called trolling. Flaming, another form of trolling, is another popular method of instigating hostility or unpleasant exchanges in online discussions by bringing up incendiary subject topics like the Sandy Hook Massacre, Religion, Politics and Sexism.  It can be seen on online forums, Twitter, Facebook pages, newspaper comments and even gaming networks.  It’s known for people to use forums to express their opinion on such matters and supporters of trolling even believe it’s about humour and freedom of speech.  It could also be the social distance that makes them feel like there is no need to moderate their own behaviour, but the extreme lack of logic and reasoning behind such hostile behaviour makes it quite apparent that there is something not stable or even sane on the other side of the monitor.   I mean, we all know that the internet is quite a remarkable and valued part of everyday life, but in the wrong hands and mental state it sure does not feel that way.

Cyber-researcher and psychologist, Karyn Krawford, has claimed that extreme trolling may be a sign of mental ill health. Her studies revealed such mental health sufferers exhibited a complete lack of empathy and were emotionally immune to hurtful images and remarks. Some sufferers even admitted it made them happy to make others feel angry.  If one claim not to be mentally ill and yet trolls, then Psychiatrist Dr Tanveer Ahmed believes they are powerless in most social external situations therefore trolling the internet allows them to feel less inferior. They may have been bullied before and now feel this is their chance to inflict the same pain on to others through online bullying.
Extreme trolling may not only be harmful to the victims. Recent studies show that constant usage of the internet and becoming an addict in most cases, like most trolls are, may soon create a new illness called S.M.A.D (Social Media Anxiety Disorder).

None the less, there seems to have been a decrease in the search interest of trolling from 2004 to 2012 on Google. 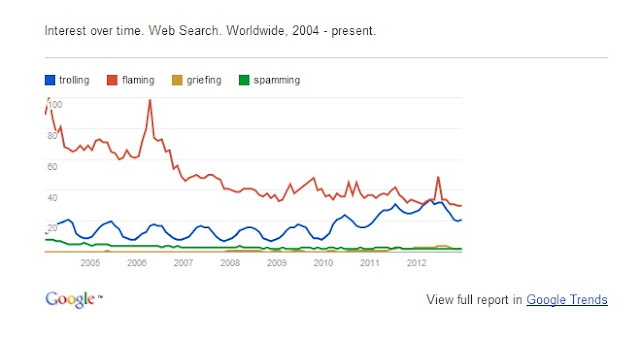 I’m not sure if that means less people are trolling or if people are just caring less about the issues it causes. Either way, I know it needs more recognition and to be taken more seriously. I have come across some trolling that is humorously informative but there is a thin line between that and bullying, which many cross. Having more online moderators on your social sites can decrease the amount of abuse trolls inflict on others, therefore creating a pleasant social experience for everybody.  Don’t let trolls ruin your chances of increasing followers and prospects from your site.  Keep discussions on your social media platforms informative and within reason, not malicious and superfluous just to provoke a response.

Posted by Priscilla Chantal at 17:47