Fired after posting this picture

Yesterday our blog post discussed that you need to be careful of what you post on social network sites. Here follows a very clear example of what not to post on your wall: 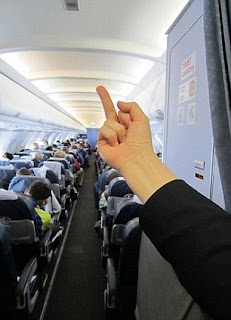 An air hostess was fired after a picture of her showing a full cabin of passengers the middle finger went viral. The flight attendant, who worked for Russian airline Aeroflot, posted the picture on Russian social network site Vkontakte. After attracting some likes the picture was retweeted hundreds of times on Twitter and went viral.
When her bosses found out they quickly fired her. An announcement was made of the sacking on the Aeroflot airline Twitter account. It read that posting the photo shows the employee’s poor attitude towards her duties and the passengers and that she had acknowledged her fault.
The hostess claims it isn't her in the picture however. She claims the picture was added to her page and that she only tagged herself. On her Vkontakte page she has asked for help and support because she doesn't consider herself to be guilty.
Posted by Unknown at 17:12