Recent research has revealed that Facebook's global domination has continued in recent years and it is now the most used social network on many continents. Despite this rising popularity, doubts remain over whether or not it is the most successful social platform for advertising and brand building. 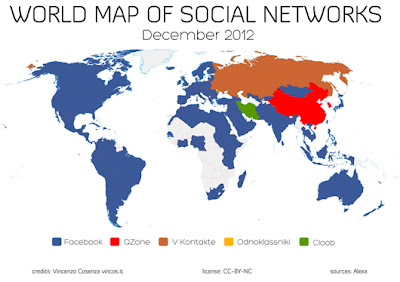 Although Facebook has become increasingly more popular in the Americas in the past 4 years, huge markets like Russia and China predominantly use other networks, V Kontakte and QZone respectively. So in terms of global brand building, Facebook still has its limitations.

Another issue is that Facebook has overtaken the most popular network in many nations, yet those that it has overtaken remain immensely important and could still be the best method for reaching your target audience. This means that it is vital that brands carry out research into which network is most commonly used by their customers, as Facebook might not necessarily be the answer. This should certainly be a key consideration before developing an international social media strategy.

Once you've decided this, don't forget to thoroughly research how the network operates and the type of content that is successful.It is dangerous to assume that the techniques that have been effective on other networks will be effective and a similar principle applies to consideration of cultural differences.
Posted by Unknown at 11:01