The First Royal Baby of the Social Media Age is Born

After it was officially announced that the Duke and Duchess of Cambridge had welcomed a son into the world, it was impossible to escape the news on social media sites. News often travels quickly on the likes of Facebook, Twitter and Instagram, but this happened even more rapidly as the royal family announced the arrival of the prince via their own social profiles. 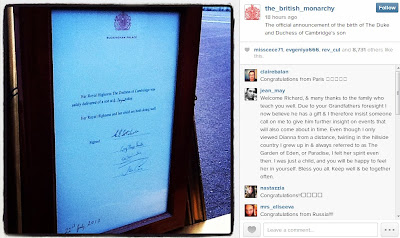 Although they used the traditional means of announcing the birth, such as a release to the media and a bulletin outside Buckingham Palace, the Monarchy chose to use their Facebook and Instagram accounts to spread the news rapidly. Personally I was surprised to discover that The British Monarchy even had such profiles in the first place, disappointingly however I doubt that the Queen updates them!