Well, it's happened. Twerking is now in the OED. The sexually-explicit dance designed to draw attention to the sizeable assets of "bootylicious" ladies (ironically popularised by a skinny white lass) is now a genuine, bona fide word. And I'm all for it.


Do a quick YouTube search on twerking and you'll receive some 4,270,000 results. That in and of itself should be enough to justify the word's entry into the language. If at least half a million people from around the world are using it in common parlance then surely that's enough. What's surprising is that it's taken this long. 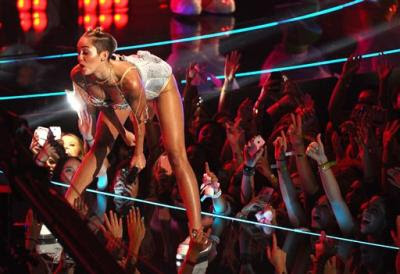 Twerking as a term has been around some 20 years, but only since social media erupted about Miley Cyrus' twerking antics did it become a real word. What we've witnessed here is the power of the internet to shape language in a way that was impossible before. Whilst words such as meme, GIF, troll (well, another definition) and blogger most certainly entered the dictionary through the influence of the internet, they are internet-specific terms that did not and could not exist before its creation.

Will the researchers over at the OED be trawling through social media platforms to identify slang that could potentially rise to the full glory of being a certified word?

All I know for sure is that next time I play scrabble I'm twerking for 16 points.
Posted by Unknown at 16:42