Released on iOS devices a few months back, dating app Tinder arrived on Android about a month ago and, having just about had enough of Angry Birds Star Wars, I decided to give it a whirl. Purely for research purposes you understand. Honest.

The app, which bears a distinct resemblance to many “Hot or Not” apps available across social media platforms, uses your phone’s GPS to present you with photos of nearby Tinder users, their age and their proximity. These photos are plucked from their Facebook account (mercifully you can edit those photos to avoid too much embarrassment) and you’re provided a simple yes or no option on whether you think them attractive. Then you move on to the next romantic hopeful, seemingly ad infinitum. It’s rather addictive. 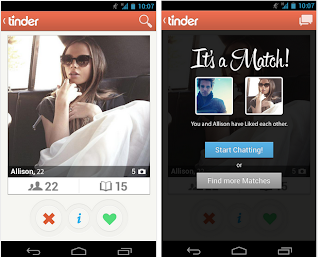 If a mutual attraction occurs Tinder informs you both and steps up the romantic interaction by offering you the chance to message each other in app and potentially arrange an actual, real life, flesh and bones meet up.
Unfortunately I haven’t had a match yet, so can’t actually report on how this all works, but this leads me on to a significant point about this new app: self-esteem. Whilst the fact that you’re not informed of who and how many people have dismissed you on looks alone may be presented as a means of shielding the user from rejection; using the app for long periods of time with no success pretty much spells it out for you.

There is already a huge amount of research into how social media is affecting self-esteem, and although it would be naïve of me to suggest that looks don’t factor into day-to-day life, there are a huge number of variables that constitute an attraction between two people.  You know, the little things; like personality. This, of course, is not translated through a handful of photos. The less photogenic may be unduly hard done by on Tinder.

Furthermore, as a free app, I wonder how much scrutiny each profile is given by the IT guys over at Tinder HQ. I’ve come across a number of suspiciously attractive young women on Tinder who I’m almost certain must be some bloke in Croydon up to no good. That or I’ve just deemed a lingerie model unattractive.

All in all, I doubt Tinder can really be deemed a “dating app” and more of an ego massage or a self-esteem destroyer. When I introduced the app to a newly single mate the other day he quickly became addicted, and has just now text me to inform me about his latest match. I’m happy for him, of course, as anyone who’s just been through a break-up could use a wee ego boost, but how many other people are suffering hurt feelings because of a lack of interest?