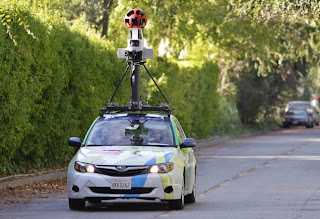 A driver in Indonesia working on Google’s street view collides with a minivan. After the minivan he hit another minivan and a parked truck. The incident happened near Jakarta, Indonesia’s capital.
The driver with the street view camera mounted on the car roof drove around in a Subaru. He hit the first minivan and accompanied the other driver to the garage. When fear for the repair bill overcame the Indonesian search driver he fled. After two miles, and with the minivan driver tailing him, he crashed with yet another minivan. The chase ended when the search engine driver crashed with a parked car. The repair bill for the first crash would have been around £11.
This is not the first crazy incident with a Google vehicle. In 2009 one hit a baby deer, a different one hit a bridge an one time, in Botswana a car crashed with a donkey. That must have been quite a (street) view!
Posted by Unknown at 17:21