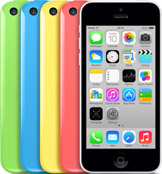 £469! That's how much you have to spend to get your hands on Apple's latest 'budget' offering, making those of us who didn't even spend that much on our first (or second) car feel absolutely third world.

Apple have built their business up on the back of a string of industry defining moments, reinterpreting the meaning of  MP3 player, tablet, all in one computer and digital media distribution in the mind of consumers forever. If last night was Apple's attempt to 're-imagine' or 'redefine' the budget phone market, or even the very meaning of 'budget', then perhaps the Cupertino giant should give it another shot... but please not soon.

Calling the devices "evolutionary" not "revolutionary" is a total cop out. At least the 5S is no surprise to anyone, with apple following up both the 3G and the 4 models with an S equivalent a year after their initial launch. The 5C on the other hand, came as a total shot out of the blue when its details were leaked several months ago. One of my initial worries was that by introducing a budget range Apple would dilute their standing as a luxury brand, although the ridiculously high price tag has now put that worry to bed.

Now there is a new worry, the alienation of the "average Joe". The £469 price tag wouldn't stand out as outstandingly high if it was nestled among Apple's other products as a colourful option, it wouldn't be jarring in the slightest if the product wasn't so aggressively pushed as a 'budget' choice. Choosing to market it in this way just makes Apple look out of touch with the world outside of the technology giant's Californian bubble.

I'm also not keen on the look of either of the new devices. I think that the 5c looks cheap (which would be fine if it actually was cheap) and the 5s models make me pine for the days where apple wouldn't release anything that wasn't pure white, pitch black or brushed steel.

The highlight of the evening was the two good jibes made by Nokia at the expense of Apple's new range, which can be seen below.