Despite gaining 10,000 followers per minute immediately after joining Twitter, Stephen Kings first few tweets on the site have been underwhelming so far! The acclaimed author suffered from 'Tweeter's block' during his first days on the site, but I'm sure more interesting tweets are set to come and he has already begun interacting with fans on the social media site. 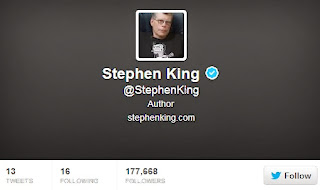