Yay! Easter! It's just like Christmas because the religious significance has been lost to commercialism but there's less booze and more chocolate.


This post doesn't have Jesus, chocolate or booze, but it does have Kevin Bacon and classic N64 references.. That's right, it's Google Easter eggs list. Yaay Easter!!!

Remember that "Six Degrees of Kevin Bacon" thing that was popular for a few minutes and then was aped by EE in a series of decreasingly amusing ads? No, me neither, but Google does and it created the Bacon Number tool, revealing any actor's connection to Kevin Bacon in a single click.

It's Quite, Too Quiet

Anyone who was a child/teenager in 1998 will have fond memories of N64 classic Lylat Wars (Starfox 64 in the US). One of the first games I experienced that had full full voice acting, there were great characters and lines throughout, my personal favourite being Bill the bulldog, the stoner/surfer friend of main character Fox Mccloud.

However, the most iconic line is surely that of Peppy Hare, who teaches the player the basics of piloting, including the evasive barrel roll.
"Do a barrel roll", when typed into Google causes the entire screen to spin, although no lasers are deflected, making the entire thing amusing but ultimately pointless.

Before you jump to any conclusions: no, this isn't about my online dating experiences. This about another lonely figure: the number one.

Three Dog Night have been claiming for nearly 50 years that one is the loneliest number that you'll (I think they mean "one will" but that would mess up the lyrics) ever know, and Google seems to agree.

Type "What is the loneliest number?" into Google and Google calculator appears with the answer (it's one). 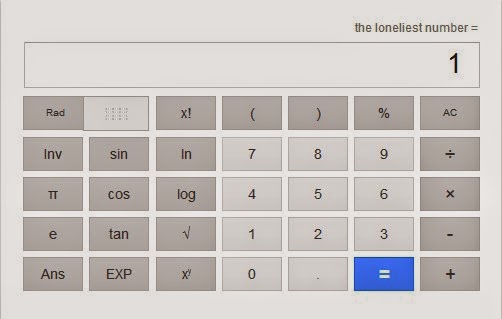 Amusing reference, but it only compounds the fact that one will never have the confidence to love again. Sad, really. Happy Easter!!

Email ThisBlogThis!Share to TwitterShare to FacebookShare to Pinterest
Labels: Easter