Apple’s latest marketing technique is to force people to endure U2’s new album. Unsurprisingly, this didn’t go down well. Upon release the album was panned by critics and apple users alike. It even succeeded in making people hate Bono and U2 more than ever, which I didn’t think was possible. Popular rapper Tyler the Creator was not a fan. 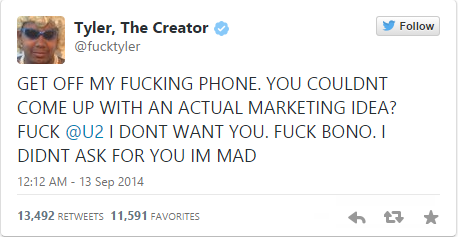 He wasn’t the only one that was mad. New York writer Sasha Frere-Jones was a prominent complainer. ‘Lack of consent is not the future,’ he wrote, whilst simultaneously advising U2 not to ‘shove your music into people’s homes.’
U2’s manager issued a statement which probably didn’t help matters, describing the album as ‘a gift from apple.’ All I can say on the matter is if it is a gift, it’s the kind you get every Christmas from your aunty once removed on your step-fathers side. AKA a rubbish one.
Apple has responded in turn to the harsh criticism they have received by bowing to public pressure and releasing a tool which allows you to easily delete the album. As of Monday, iTunes users could delete the album by clicking here. Before the link was released iTunes users had found it difficult to remove the album, as the usual slide-to-delete mechanism did not allow them to do so. 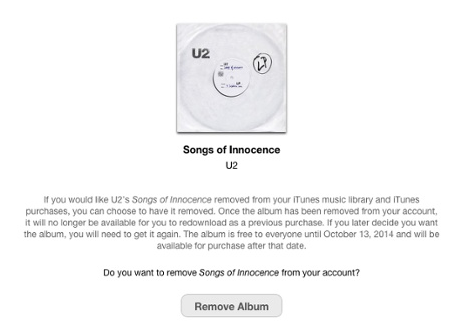 It may now be easier to delete the album, but iTunes users should beware – there are probably more incoming. Apple have reportedly planned a $100 million marketing campaign around Songs of Innocence, so there may well be several more free downloads heading your way soon. I look forward to it…

Email ThisBlogThis!Share to TwitterShare to FacebookShare to Pinterest
Labels: apple, itunes, u2