Even Perverts Need a Release

There was an article in the Telegraph today which, in a nutshell, suggested social media encourages us(/primarily men, according to the writer) to be weird perverts. 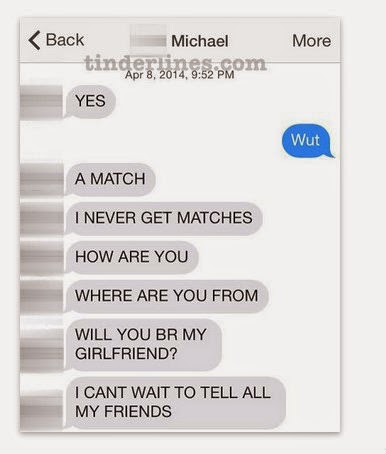 and Facebook is a hotbed of trolls who creep down its corridors looking for profile pictures which show a hint of cleavage, so they can then send borderline incomprehensible messages about how difficult it is to ‘finding nice frend’.

So yes, there are a fair amount of freaks on t’internet. But if you’ve ever walked down Kentish Town High Street of a 3pm in the afternoon, you will understand that the internet doesn’t make people weird, perverted freaks. As our good friend 20p man reminds us daily as he shuffles along like an unwashed womble perving on women and asking people for small change, the world is full of mentals. The internet, far from being an impetus for being bat shit crazy, is, if anything, much more akin to a recuperative pill.

Take again the Tinder psycho. One day he will have made enough sexual innuendos for his soul to be replenished and he, too, will find actual love with a woman who said that yes, in fact she would like to sit in the place he mentioned*. Approaching women via Tinder means that his essentially harmless chat is kept out of the courtrooms, and the girl doesn't get charged with GBH. (Not to say that girls don’t come out with crazy lines too. I’m sure they do. It’s just less threatening because they’re soft and pretty).

As for the Facebook stalker – it's safer for the world at large that they're being kept busy trying to outdo Facebook’s privacy settings and get beyond photo number one in ‘Profile Pictures’ of every girl under the age of 30. The other option is letting them return to their usual hunting ground; the fully packed, peak time commuter train.

So really, we shouldn’t diss social media and the net for being a breeding ground for the undesirables and sexual predators of the world. Approaching people through social media is great for both sides - the sex pests can get their fill of being creepy, and the girls or boys on the receiving end can simply press 'block' and repress the fact that they were ever asked to do that in there. Just as with any affliction, we all need a release at some point. It stops us walking around Kentish Town High Street at 3pm in the afternoon, at least.

*2 seconds on TinderLines will make this reference blindingly clear.