Facebook Let's the World Know When You've Snuffed It!

There’s a new thing on Facebook. It’s a little screen that pops up when you are within the boundaries of IMMINENT DEATH and asks you if you’ve snuffed it, or have managed to wrench free a hand in the midst of the rubble and are using the last of your energy reserves to tap a little button on the screen to say ‘yes, Facebook masters, I live on yet’. 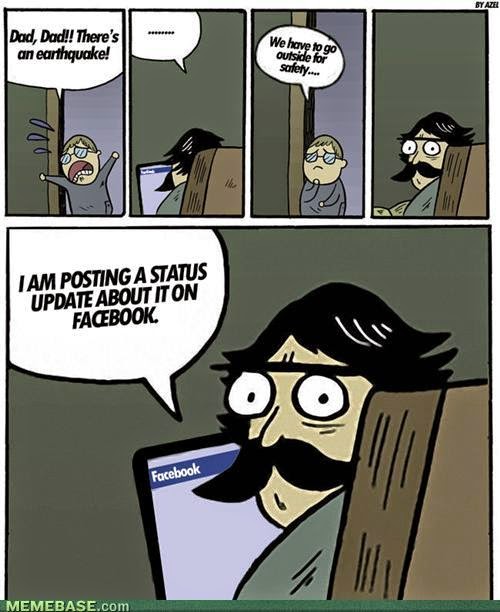 The idea is based on the earthquake and tsunami that happened in Japan in 2011. I’m not an expert on the subject, but having lived there for two years in the immediate aftermath of the earthquake, it seemed to be the general consensus that a lot of mobile internet and coverage providers were down during the peak of the crisis, which would make the idea slightly redundant.

But it’s an interesting concept. I mean, what else should people think of when they’re facing a potentially life threatening situation other than their social media accounts? In a swift matter of moments everyone of importance, mild importance, non-importance and those total strangers whose friend request you accepted because you thought you might know them can be alerted to your safety. Or to the fact you are mid-perish.

Are you:
a)      Safe
b)      On the cusp of meeting your maker and ready for Facebook to engage in memorialising your page immediately
c)       About to play the hero and sacrifice yourself for the sake of those around you
d)      Suffering mortal wounds to the neck, pelvis and ankle but think with some long term intensive care and mental health treatment there may be a chance you’ll one day return to normality?
e)      In bed, what is this?

{OK, on a more serious note. It’s good because Facebook, Twitter etc. are often there when call coverage is not available and it reaches a lot of people at once. It’s also very simple and quick just to push a button. It’s also not good because ‘I’m safe’ does not even begin to put a comforting blanket on the situation – you can be safe whilst trapped under your desk in a classroom, or safe walking around the city, amidst the aftershocks, unable to get home because the trains have all stopped running and you have no idea where your family are. If they want to give people the option of giving their family and friends some comfort, they should look at making the idea more comprehensive, perhaps offering a quick voice note service that translates as a status, along with GPS marking your current location.

There’s also the small issue of when you are absolutely not safe. What are you supposed to push then?}
Posted by Unknown at 16:04