There are a few things in life which, though tolerable in reality, are just infinitely, infinitely more appealing on Twitter. And I mean a few. It's basically James Blunt and Tesco Mobile. 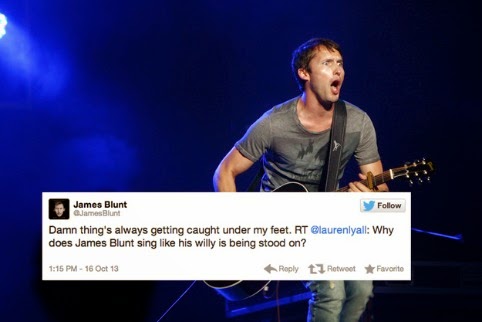 Though not actively passing my day with James-Blunt inspired rages, I wasn't exactly a convert of the fan club, until I discovered Blunty on Twitter. Wondering why? Let me give you a few examples...


Really? I thought we'd got rid of me years ago. RT @ianbirrell: James Blunt is 'dominating' UK culture, according to Labour arts spokesman


You would if yours was this big. RT @HannahNorman96: I've never fully understood why James Blunt felt the need to strip in his music video
— James Blunt (@JamesBlunt) December 9, 2014


This is embarrassing on so many levels. RT @JimJimhawker: Have agreed to go and see james blunt with my mum....
— James Blunt (@JamesBlunt) November 23, 2014


I was talking to the driver. RT @Chelsea_Goulden: Just got in a taxi and You're Beautiful by James Blunt is playing. Why thank you kind sir😂
— James Blunt (@JamesBlunt) November 23, 2014


Interesting. What other forms of prejudice are you into? RT @sjd500: @GaryLineker James Blunt sounds a bit too posh to me to be a pop star.
— James Blunt (@JamesBlunt) November 20, 2014


So though he may not have made a big hit for all of us in the music world, he's definitely created an image for himself in the Twittersphere. Perhaps it's this recent swell in support for him online that made him bold enough to write a letter to the culture minister, who claimed privileged performers are dominating in the British arts.

Blunt's brilliant response claimed that it's Bryant's “populist, envy-based, vote-hunting ideas which make our country crap, far more than me and my shit songs, and my plummy accent”.