We've seen videos of people flying their drones about, capturing some really amazing footage, however they're still controlled by a human; and all humans are prone to make errors, some more than others. Unfortunately pretty much anyone can buy a drone(if you have the money) and this includes people who may not be the most aware of their surroundings (or in other words, the not the best pilots!)

Skydio is starting a 3 million dollar project to ensure all drones will be un-crashable. "In five years, the notion of a drone crashing will be a weird, foreign thing” says Adam Bry, co-founder of drone auto-pilot startup (Skydio) and founding member of Google’s Project Wing drone delivery project. This company's aim to connect a drone's camera to its flight computer so that it can automatically avoid  obstacles  and fly on its own without a GPS. 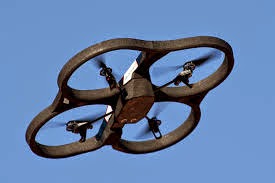 To show off their new technology they've created a magic wand. No, not an actual real wand from the Harry Potter series, but technology that turns your smartphone into a metaphorical magic wand. You will be able control the drone from your smartphone by just pointing it in the direction you want the drone to go. This obviously means loosing that bulky dual joystick drone controller.

Hopefully they can pull this project off successfully as it means less chances of someone crashing a drone and getting someone injured! (not to mention the huge cost of repairing/buying a new one!)